We don't get snow too often down here, unlike when I lived in Scotland, so this was a rare photo opportunity. 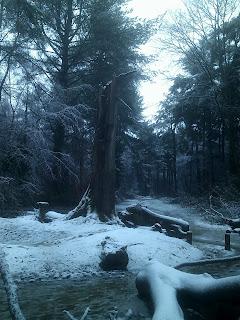 This picture was taken about 9:45am. Already now (3pm) the snow is almost all gone.

I don’t follow the philosophy blogosphere that closely any more. Many of the blogs that I used to follow are now dead or almost so. Some well-established sites, like Crooked Timber and Leiter Reports, still seem to be going, but I rarely visit.

Still, this recent piece of advice for graduate students caught my eye. Apparently it caused a bit of a stir on social media, but I didn’t hear about that until afterwards. I see why some of the advice is controversial, but there’s no denying that the author has published a lot for a PhD student, so the advice clearly works – at least for him.

This was interesting to me, not only because I can certainly still learn from advice myself, but also because I’m scheduled to give some advice to our own PhD students later this semester. I don’t know exactly what I’ll cover/say just yet. If I write up something, then I may share it here. In the meantime though, I have been exploring some other advice, to see what’s already out there. This post is essentially my own literature review and notes.

Daily Nous have previous history here, having also featured this guest post from Jason Brennan, in which he advises writing for 20 hours a week (four hours per working day). No doubt this is why he is also very prolific, with 20 books published or forthcoming. To be clear though, he isn’t recommending being a workaholic; he suggests that most people spend too long on other tasks, such as email or preparation for teaching, when they could instead by writing.

Michael Huemer shares this advice on publishing, which takes a blunt and at times jaded/cynical tone. Maybe the comments on longwindedness and the randomness of peer review are probably slightly exaggerated, but it strikes me as realistic on many points. For instance, once you’ve published a bit, “Many people will vaguely know who you are but not actually have read anything of yours”. That sounds about right. There are plenty of people whose work I know of, but don’t have time to read it unless (i) I need to cite it in my own work, (ii) I need to teach it, or (iii) I’m asked to review it (usually anonymously). And, even though he’s often critical of academic publishing, there’s some good advice here, particularly I think on citations.

While Huemer is probably right that referees can be bad in various ways and for various reasons, and sometimes the best response is simply to send the paper off again and hope for a different outcome, it should be noted that even ‘bad’ reports (by which I do not simply mean critical ones, but ones that misread the paper) can be helpful.

Lewis Powell has a recent post focused on highlighting the evidential value of bad referee reports. It may well be that a referee is not an ideal reader. They may be careless or inattentive. However, they are actual readers. If a referee managed to misunderstand something, then it shows that another reader might also misunderstand that point. As he puts it, the aim should not simply be to make it so that a careful reader can get your point, but so that even a careless reader cannot miss your point.

Finally, for now, John Danaher has a pair of posts on writing and publishing articles, again focused on philosophy but probably somewhat applicable elsewhere. One thing I liked about the former is his observation that people are more likely to share successes than failures (apart perhaps from occasional griping at unreasonable referee reports).

Regarding his actual writing process, he suggests detailed planning (4-10 sides of A4) then writing 1,000-2,000 words per day, usually in a couple of hours in the morning. Unlike Hendricks and Brennan, above, he doesn’t say that this has to be two hours every day – only when actually working on a paper.

He says he’s more likely to submit to a journal before seeking comments from friends or colleagues. That may work for him, though it’s probably not good advice for inexperienced authors (and, of course, it produces more refereeing work for journals). It seems he, at least, has had some genuinely constructive referee reports – his piece on writing quotes one that says his paper is wrong, but nonetheless a useful contribution – though he also mentions going through the five stages of grief (denial, anger, bargaining, depression, acceptance) after rejections. Preparing for failure comes up in both pieces.

Having looked at some of what’s already out there, I don’t know whether I’ll have anything particularly ‘new’ to add. As I said, if I do find time to write up my own thoughts, then I’ll probably share them here (likely in March).

I officially 'announced' a change of emphasis on the blog last month. Of course, there's never been much of a formal content policy, so I'll continue to post a variety of things that interest me, as I always have done. And this is likely to evolve over time, as it always has done.

Nonetheless, I decided that it was about time that I changed the blog's title. I never really gave much thought to the old one, when I started. I called it 'Praesidium' (Latin for guardian) in reference to an old school newspaper that I was once involved in (the 'Grammar Guardian'). However, this has never really been a 'news' blog.

I only recently discovered that you could change the title of a blog, having never really bothered to look into this. But now I've got round to it, this blog is now simply 'Ben's Bits and Blogs' which seems to better reflect its content (as well as involving some alliteration and a bit of a pun).

The URL, of course, remains unchanged so if anyone has ever linked here the link should not be affected.

Email ThisBlogThis!Share to TwitterShare to FacebookShare to Pinterest
Labels: blogs

On today's walk, we saw two squirrels chasing each other around a large tree. One disappeared somewhere up the tree as we approached, but the other sat around long enough for me to get some pictures. 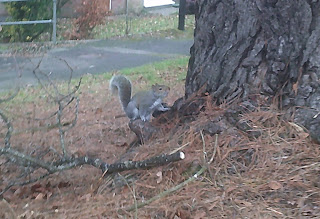 No zoom involved, though I did crop the photo on my laptop before posting.

Long-time readers will recall my interest in lotteries. The use of penalty shootouts to settle football matches is sometimes likened to a lottery. Indeed, it's sometimes described as a lottery, though I think this is metaphorical, not literally true.

Before the introduction of shootouts, matches were sometimes settled by the toss of a coin. That idea seems to have been revived for cancelled matches in the women's FA Cup.

The BBC quotes Everton boss Willie Kirk, saying that he "never, ever thought a game would be decided by that at this level.... It would be a shame for those clubs to lose an FA Cup game on a coin toss." Perhaps he's unaware that Liverpool 'beat' FC Cologne on a coin-toss in the 1964-5 European Cup...

Having been up to see the new year in - and old one out - last night, we didn't get up that early this morning. Still, it was a cold night (-2 according to the forecast) and there was still quite a frost in the garden, so we decided to go for a walk in the woods to see what they looked like with frost. 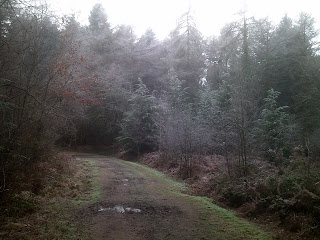 Unfortunately, we'd probably left it a bit late by the time we actually got there and the effect wasn't as dramatic as I'd hoped. In fact, the woodland looked less frosty than the gardens, which surprised me.

I know there can be micro-climatic variation, but I'd assumed the built up area would be warmer if anything, due to all the centrally-heated houses. Still, there were some frosty pockets, which I focused on in my photography. My camera's not brilliant at close ups, but here's an attempt at frost on leaves and branches. 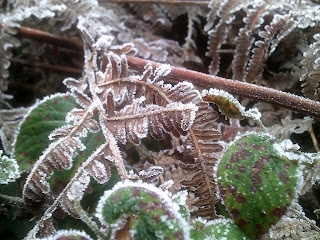 Not bad, but perhaps we'll have to try again on a morning where we get up earlier. At least the mud was a bit frozen, so not as wet as it has been of late.