I haven't had time to read the public consultation document from the Nuffield Council on Bioethics yet but, since it relates to several matters that are of interest to me - and have appeared on this blog - I thought I'd mention that they're seeking public views on incentives for donors.

UPDATE: Public Ethics Radio features Anne Phillips on ownership of the body here.
Posted by Ben at 4:21 pm No comments: Links to this post

For anyone who hasn't yet seen these Cameron/Pulp videos... This one is the best I've seen so far, though this one (with pictures of vandalized billboards) is quite good too.
Posted by Ben at 11:37 am 1 comment: Links to this post

Mothers to do More Housework in the Future 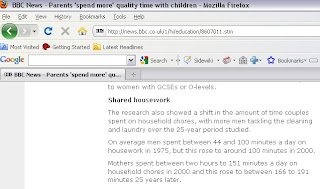 This report on the BBC suggests that parents spent more quality time with their children in 2000 than in 1975.

However, what I assume is a reporter gaffe, makes it sound like a chilling warning for anyone planning to be a mother in 2025: "Mothers spent between two hours to 151 minutes a day on household chores in 2000 and this rose to between 166 to 191 minutes 25 years later."

Screen grab provided in case they fix it.
Posted by Ben at 11:53 am 1 comment: Links to this post

Who's Responsible for the Volcano then?

I haven't had any personal travel plans directly affected by the Europe-wide flight restrictions that have resulted from the Iceland volcano. Nonetheless, it's certainly had a disruptive effects in various ways, ranging from students late back to Liverpool's long trip to Madrid.

Apparently, in other news, an Iranian cleric has blamed women dressing immodestly for earthquakes in Iran. I wonder who's responsible for the volcano?
Posted by Ben at 4:05 pm 1 comment: Links to this post

I recently touted Amazon's spring bargains, but it gets even better. I noticed a while ago that they were recommending me some free MP3s. It seems that they have a small, but rotating, selection of free MP3s.

I've yet to have anything particularly exciting from them, but (along with iTunes' free single of the week) it's a good way of getting exposed to some new artists. Particularly notable at the moment though is this somewhat random 7-song sampler, featuring Holly Golightly, New York Dolls and Rocket From The Crypt.

(Disclaimer: I've recently joined Amazon's associate scheme, in the hope of earning a few pennies from this blog, but I won't get paid any commission for you downloading free music!)
Posted by Ben at 8:59 am No comments: Links to this post

I've been keeping an eye on the BBC's live election coverage, which has produced a few interesting stories already. Apparently, one Muslim group has declared in 'haram' (forbidden) for Muslims to vote in the UK. That's an interesting case for advocates of compulsory voting, since it could lead to claims for conscientious objection or cultural exemptions, though no doubt many would argue that the possibility of abstaining is sufficient protection.

Another interesting piece concerns a Labour candidate using the Lib Dems' commitment to consider votes for criminals as part of a negative campaigning strategy. Whether or not denying criminals the vote violates their human rights, it does seem less democratic to deny them the vote - but I doubt that allowing criminals the vote would be a popular vote-winner amongst the wider population.
Posted by Ben at 11:15 pm No comments: Links to this post

There's a rather interesting post over at Crooked Timber about libertarianism and feudalism. It's a well known problem that there's a tension between two standard libertarian principles, viz. that you own yourself and that you own the products of your labour - why then don't parents own their children? John Holbo argues that this system would amount to a form of feudalism. Libertarians need not accept this but, if they argue that they subscribe to their principles in order to promote freedom, they need to explain why their particular principles better promote or respect freedom than any other alternatives, such as redistribution to give the poor more freedom. There's more to it than that, but I don't have time to read the literally hundreds of comments...
Posted by Ben at 10:15 pm No comments: Links to this post 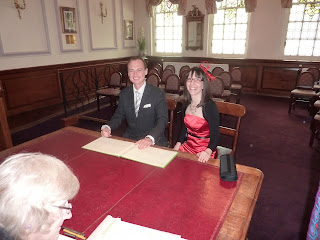 Today I went to the (state) wedding of my old flatmate Pavel and his new wife Eleni (pictured right).

Then we went to the Randolph, Raoul's (where the manager allowed Pavel to buy the cocktail glass he and his wife had just shared) and then Brown's to celebrate.

Since I was witness, hopefully this post will help me remember anniversaries. Here's to many more happy years ahead for the both of them!
Posted by Ben at 11:23 pm No comments: Links to this post

Email ThisBlogThis!Share to TwitterShare to FacebookShare to Pinterest
Labels: my life, oxford, pictures

I've linked before to examples of Tory campaign poster spoofs. It seems that the fun isn't restricted to those with fancy computer software. Percy's blog has examples of graffiti on campaign posters.
Posted by Ben at 11:25 pm No comments: Links to this post

No, this post isn't about deforestation but rather the popular online retailer. Last week I noticed - quite by chance - some quite fantastic clearance items in their music bargain section.

With the demise of Virgin and Borders, it's been a while since I've come across anything similar on the High Street, but I've acquired several pretty good albums as a result of taking a chance on something that I didn't know because it looked promising and was only a couple of quid. The danger of having all these bargains online - along with the possibility of checking out online reviews, YouTube, Spotify and Last.fm - was that I ended up buying quite a few albums, but mostly for under a pound. I figure that makes it hard to go too far wrong...

Ok, mostly they were things I've never heard of, but there were a couple of exceptions. Albums by HIM (this one seems not to show up in searches and to have come down further since I ordered it), Travis and Natalie Imbruglia for under £2.50. Some that I ordered seem to have reverted to their original price (like this one) or gone out of stock (like this one), so I'm glad that I got in when I did.

A few others worth mentioning which - at time of writing - are still available at great prices (around £1 each) include the Electric Soft Parade's The American Adventure and Eighteen Visions' self-titled. If you're that way inclined, a 2CD dance/rock compilation from Cream - featuring artists such as Goldfrapp, The Egg, Depeche Mode and Bloc Party - for just 88 pence (though, to be honest, I found this a bit disappointing). For those whose tastes differ from mine, Busted or Desperate Housewives soundtrack, and loads more obscure stuff, such as this Cambridge-based compilation.

One warning to anyone browsing through is that some of the titles listed are actually singles, and thus not always so much of a bargain. Further disclaimer: I've recently joined Amazon Associates. I was planning on mentioning this sale anyway - as I have done before (e.g. one, two) - but using the links above to purchase may earn me money.
Posted by Ben at 10:31 am No comments: Links to this post

Barbara Goodwin reviews Neil Duxbury's Random Justice in the Times Higher Education here.
Posted by Ben at 10:00 am No comments: Links to this post

I'm off today for the Association for Legal and Social Philosophy annual conference in Southampton. There will be fewer people I know there than last summer in Edinburgh, but I hope that it will be just as interesting. The fact that the theme of the whole conference is the future(s) of democratic citizenship bodes well!

My paper is in the first session, straight after lunch today, and I'll be reunited with my old co-panellist (from Warwick/Brave New World) Dean Machin.
Posted by Ben at 10:14 am No comments: Links to this post

Next term's lecture lists are already available. Interestingly - and it's the first time that I've seen this - there's also a PPE lecture list.

I'm organizing another graduate class of my own, following on from its success last year. Provisional details:

These are research seminars for those interested in contemporary democratic theory. They are primarily intended for graduate students in philosophy, e.g. those taking the B.Phil political and legal philosophy option, but graduate students in other areas (e.g. M.Phil/D.Phil in politics or law) are equally welcome. Undergraduates should seek permission from the lecturer (ben . saunders [at] ccc . ox . ac . uk) first, in order to keep a cap on numbers (this should be forthcoming).

Each week’s session will begin with the presentation of a work-in-progress paper in the field of democratic theory. I will begin, with a paper on the problem of defining democracy, and will probably present in later weeks too, but there will also be opportunities for interested graduate students to present. Volunteers are encouraged to email me before the first session.

My papers at least will be posted on WebLearn beforehand, at http://tinyurl.com/democseminar though reading them before the seminar is not required. This site will also include an updated schedule and a couple of relevant background readings for those interested.

Week 1: Ben Saunders – A Relativized Definition of Democracy
Weeks 2-4: t.b.c.
Posted by Ben at 9:39 pm No comments: Links to this post

Philosophers in the Media

Jonathan Dancy on Craig Ferguson and A. C. Grayling on the BBC. I wonder if this is the kind of impact that the REF will acknowledge?
Posted by Ben at 9:37 pm No comments: Links to this post