Libertarians often assert that we own our bodies, as property. It's rather hard to argue for such a claim, which operates as a premise of their political philosophy, but many think it reflects our ordinary attitude to rights over ourselves.

That this may in fact have counter-intuitive implications is nicely illustrated by Walzer and Fabre. If our bodies are private property, then we should be able to do what we want with them (subject to not violating others' rights), which would include - for example - selling them (prostitution, organ sales, etc).

There are two related features currently on the BBC website - one about a woman raising money for charity by selling herself for dates and one about the commodification of cadavers. I have an article on organ procurement in the latest Journal of Medical Ethics (subscription required).
Posted by Ben at 10:21 am No comments: Links to this post

I find quite persuasive that what's morally wrong - if anything - about eating meat is not that it involves the death of an animal but animal suffering throughout its life. Torturing an animal seems far worse, morally speaking, than having one painlessly killed (e.g. put down by a vet), because it's clear that animals feel pain but not that they have consciousness of themselves as on-going agents with future projects.

If this is right, then eating meat per se isn't wrong, it's simply the meat industry that is. Maybe if animals were kept in good enough conditions, it would be ok to eat them. I don't think there needs to be too much debate as to whether animals like cows, pigs and even chickens can feel pain - though there is for some animals (like fish). An alternative to treating the animals better, however, might be to genetically engineer them to they don't feel pain. An intriguing suggestion...

The BBC has had a couple of interesting features on electoral reform recently, which I thought I'd highlight here:

This one explores why voters vote against their self-interest, suggesting that they may be more swayed by rhetoric than facts or that the working classes may resist the paternalism of liberal 'do-gooders.'

This provocatively-titled piece suggests that we could elect MPs in the same way as reality TV stars, eliminating the least popular until we end up with a majority vote between two candidates. As it recognizes, this is really similar to the way French presidents are elected, though a more realistic approach is to have just one vote with voters numbering their candidates, so that votes can be redistributed without the need for another poll. That's how many student politics elections work, but I worry whether all voters would understand the system were it practiced at national level.

Finally, I wanted to highlight this piece as absolute trash. They try to predict how electoral results of the past might have been different had we used Alternative Vote rather than our current First Past The Post system. The problem is that, even if the survey about what people's second choice would have been is accurate, the whole point is that their first preference may well have been different (a point acknowledged at the bottom)!

Under our present system, many people vote for one of the main two parties - which is not their real preference - simply in order not to have their vote wasted. Indeed, it's quite possible that someone who voted Labour in the last election, but really understood the implications of this survey, could have answered that Labour would have been their second-choice under AV - but that would have harmed, not benefited, Labour...
Posted by Ben at 10:20 am No comments: Links to this post

Jan Palmowski is a Disgrace: He Must Go

Protest against proceedings at King's College, London. See here.
Posted by Ben at 8:20 am 16 comments: Links to this post

The spoofing of Tory campaign posters continues. Hot on the heels of MyDavidCameron comes MyToryTombstone!

Here is my go at the original: 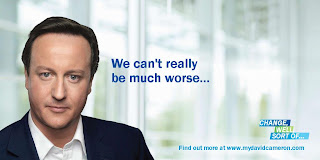 Posted by Ben at 10:01 pm No comments: Links to this post

A First Step Towards Eugenics?

I've posted stories before about incentive payments being used for various ends, such as to encourage patients to take medicine or to be good parents. Well, now it seems that a group in the US is paying drug users to get sterilised! I'm not sure I really agree that this is exploitative, whether or not I agree with it all things considered. What worries me is that it could be the first step towards more widespread eugenics, if other 'undesirable' groups were to start being paid not to breed...
Posted by Ben at 9:03 am No comments: Links to this post

I was pleased to find that, after an extra 5 years of (postgraduate) university education, my starting salary last year was - slightly - higher than the average graduate starting salary, which is apparently £25,000. Mind you, I suppose the average for those with a degree in PPE from Oxford may well be higher...
Posted by Ben at 11:57 pm 1 comment: Links to this post

Email ThisBlogThis!Share to TwitterShare to FacebookShare to Pinterest
Labels: bbc, links, my life

Via a comment on the Philosophy Smoker, I found that you can see the CVs for four interviewees for a tenure-track position in Ethics at University of Florida. Since those of us on the market often have only a vague idea of what we're up against, this kind of insight into who is competitive for such a hire is potentially very helpful. That said, however, three of them are ABD with no significant publications, so presumably being looked at more on grounds of potential and great letters of recommendation. Unfortunately, since I don't even know what my referees write, I can't know how I compare there...
Posted by Ben at 9:37 am 1 comment: Links to this post

How to Decide Who to Lay Off...

There's been a lot of discussion lately about King's College, London choosing to lay off several members of faculty (compulsory retirement/redundancy), for example on Leiter. In some cases, it appears that members of staff fall victim to 'restructuring' while others may lose their jobs due to lack of productivity (in practice, the difference can be hard to discern, since the former may be a mere cover for the latter).

It appears that Monty Python already discovered the best way to decide who to lay off in these difficult circumstances - namely, a fight to the death. Thanks to Chris for informing me of this sketch.
Posted by Ben at 11:47 pm No comments: Links to this post