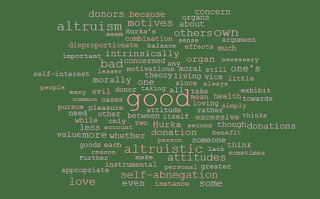 
It has traditionally been assumed that organ donation must be altruistic, though the necessity of altruistic motivations has recently been questioned. Few, however, have questioned whether altruism is always a good motive. This paper considers the possibility that excessive altruism, or self-abnegation, may be intrinsically bad. How this may be so is illustrated with reference to Tom Hurka’s account of the value of attitudes, which suggests that disproportionate love of one’s own good – either excessive or deficient – is intrinsically bad. Whether or not we accept the details of this account, recognising that altruistic motivations may be intrinsically bad has important implications for organ procurement. One possible response is to say that we should take further measures to ensure that donors have good motives – that they are altruistic is no longer enough. An alternative is to say that, since altruistic donation need not be intrinsically good, we have less reason to object to other motivations.

I commented recently on proposals to ban the consumption of dog meat in the UK. I don't know whether this is really going anyway - I suspect our political class have greater concerns right now. However, it seems that the US House has just passed a bill penalizing consumption of dogs or cats (with exemptions for native religious customs).

Again, the logic seems to be that these animals ought not to be slaughtered because of how beloved they are by people. It doesn't seem to be based on anything like intelligence, since pigs seem to be as smart as dogs (see here and here).

According to what moral system does an animal's right not to be slaughtered depend on its popularity?
Posted by Ben at 10:53 pm 2 comments:

While making some updates and changes to my Ethics of Public Policy module, I decided to change one of the core readings on the food topic. I use a piece by Sarah Conly arguing for paternalistic interventions, but wanted to pair it with something defending a more traditional liberal approach.

I found this piece by Alex Rajczi, which outlines some fairly standard liberal positions, for instance denying that voluntary self-harm is a reason for government interference. There are, however, two arguments that he does give some credence to, both suggesting that people's unhealthy choices are not substantially voluntary.

First, he suggests that people may lack the necessary information to make good choices (by their own lights). For instance, calorie information is not always easy to find or may be difficult to interpret. Rajczi argues that this is not itself reason to ban unhealthy food, since there are less intrusive measures available, such as better food labelling.

This is topical, since it seems there's currently disagreement between the Department for Health and the Treasury over proposals to require restaurants to provide calorie information. (See BBC report here.) The main argument against this proposal seems to be economic - the cost to small businesses in particular - though the article also raises the interesting point that calorie labelling can exacerbate eating disorders. I'd like to see the evidence mentioned, but not specifically referenced, in the article. It does raise an interesting health vs. health conflict though.

The second argument that Rajczi gives some credence to says that people's food choices are non-voluntary because they cannot afford to eat more healthily. As it happens, this is also in the news at the moment. According to this story, 3.7 million children live in homes struggling to afford a decent, healthy diet.

Rajczi considers that some of us may live in an unjust nutritional environment. This is not immediately obvious, since it depends on what theory of justice one subscribes to. On some, such as libertarianism or luck egalitarianism, the inability to afford healthy food is not itself sufficient to establish injustice. However, one need only accept some kind of sufficientarian minimal safety net - and not full-blown egalitarianism - in order to think that this is unjust.

Again, Rajczi argues that the appropriate response to this problem is not to ban unhealthy foods, or even to tax them (which, by increasing the cost, exacerbates problems for the poor), but rather addresses the affordability of healthy food. Rajczi proposes either income/wealth redistribution or subsidies for healthy foods.*

*There's an unfortunate typo in the last sentence before the concluding section, which actually says subsidies for unhealthy foods. In context, this is obviously a mistake, though I took the trouble to confirm that with him.
Posted by Ben at 9:42 pm 4 comments: