J. S. Mill argues that individuals should be able to engage in 'experiments in living' free from social pressures (provided that they do not harm others). His On Liberty contains only a brief discussion of Mormon polygamy, which he makes plain that he dislikes but is prepared to tolerate provided that it is consensual. The Subjection of Women has much more to say about marriage, unsurprisingly, but I think it fair to say that it's two main themes are: a) Women should have other options in life than marriage, to ensure that if they choose marriage they do so freely (which, Mill assumes, will make marriage more attractive) and b) Partners within a marriage should be able to decide for themselves how it will operate, which may mean dividing conjugal roles, reversing traditional patterns (e.g. the man being a home-maker), or indeed following them.

As far as I'm aware, Mill has surprisingly little to say about alternatives to marriage. (Surprising, I suggest, because although he was writing in the context of Victorian England, his own relationship with Harriet Taylor must have raised the issue in his mind.) This interesting post about the 'relationship escalator' seemed to illustrate Mill's views about the dangers of social conformism quite nicely. Society expects relationships to follow a certain pattern that simply does not work well (or at all) for those with 'deviant' preferences (polyamory, etc), who find their chosen way of life stigmatised.

Speaking of such things, it's interesting to hear tht mixed-sex couples are now appealing for the right to civil partnerships in the name of equality. This seems like a sensible move to me - it could have been avoided had gay marriage been introduced instead of civil partnerships, but it seems discriminatory if homosexual couples have the option of civil partnership or marriage, while mixed-sex couple can only marry. I doubt that it's likely to lead to state recognition of other non-standard romantic relationships though.
Posted by Ben at 8:46 pm 132 comments: Links to this post

Making a Meal from Party Food

We picked up a selection of Creamy Cheese Canapes from the Tesco Finest party food range, but didn't really know what to do with them, since we weren't planning a party and my partner wouldn't eat them (being vegan). Having the whole pack as a snack would be rather extravagant, not to mention unhealthy (the whole pack having 60% of an adult's RDA fat), so I decided to make a meal out of them - literally.

While my partner had a veggie burger, chips, and baked beans, I decided to have these in place of the burger, with a few chips and beans. The oven was on anyway and these are easy as anything to prepare - stick them in for the last 6 minutes, just before putting the beans in the microwave. The result can be seen below. 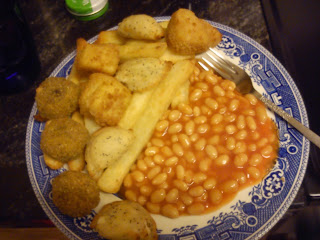 My favourites were the breaded camembert wedges. I don't normally have baked camembert, but it was lovely and goo-ey and stringy in the middle. Sadly, by the time I got to the last one, it had cooled down and wasn't as nice. If you're putting these out for a buffet or similar then I'd definitely recommend going for those first, while they're hot.

The goats' cheese and sweet onion pastries (the ones that look like Cornish pasties) were also nice and soft. They were described as lemony as they definitely were, this being the dominant taste (though not overpowering), with just a hint of the onion.

Finally, the Wensleydale and sweet cranberries were definitely my least favourite, but I've never particularly like Wensleydale (or most fruit and cheese combinations). They clashed a bit with the rest of my meal, so I left them for 'dessert', but still wasn't that keen. I guess the advantage of sharing these with others is that hopefully you'll each have different favourites.

Obviously, this isn't the sort of meal I'd ordinarily have, it was only because we #TriedItFree that we ended up with the cheeses at all. If you get some of these for a party, and share them round, then I doubt there will be leftovers - but if there are, they make a surprisingly satisfying basis for a meal on their own.
Posted by Ben at 9:44 pm 5 comments: Links to this post

It seems that I forgot to plug my first contribution to Politics Upside Down, my department's blog, back in October. It's a piece about election timing and the merits of randomizing, rather than fixed terms (as in the UK since 2011) or Prime Ministerial discretion (as previously the case).

Anyway, if you didn't see it before, a re-worked version of the same basic idea now appears on The Conversation, which will hopefully bring it to a wider audience.
Posted by Ben at 9:50 pm 5 comments: Links to this post

This is old news now (a Miliband speech from October), but apparently I missed it at the time. I don't know whether it's official Labour policy - presumably their 2015 manifesto will make this clearer - but Labour are seemingly proposing a senate (second chamber) to 'represent the regions'. While I agree that the current Lords is unrepresentative, on this front and others, this seems like an odd choice of remedy.

First, why should regions be represented, rather than people? Israel, for example, has no regional constituencies but uses a nation-wide PR system. If it happens that people vote along regional lines, so be it, but other cleavages may be more important and there's no obvious reason why our political institutions ought to be designed around geography (the idea that 'all politics is local' may be a consequence of these institutions, rather than a justification for them - as Andrew Rehfeld argues).

Secondly, the House of Commons is already elected on a geographical basis, so presumably the regions are already represented there. If we're to have an elected second chamber, why not constitute it on some other basis? For instance, we could assign people to constituencies based on age or even randomly (again, Rehfeld's proposal).
Posted by Ben at 6:39 pm 2 comments: Links to this post

Here's the recipe I promised in an earlier post (again, it was Eloise who made this and, again, I #TriedForLess thanks to a Tesco voucher for the pears - and the JD was bought in a Black Friday promotion!) 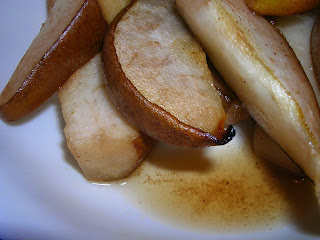 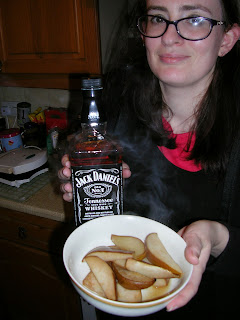 Drizzle some JD in the bottom of a flat oven dish. Place a layer of pears over it. Sprinkle sugar, cinnamon and ginger over the top, then pour some more JD over it. Repeat with each layer. Avoid putting sugar on the top unless actively seeking caramel. You’ll get 2-4 layers depending on the size of your dish. Put in a preheated oven at gas mark 7 (approx. 220 C) and cook for half an hour.
Serves 4-5.

Unfortunately, I didn't try any of the pears without the JD treatment, so it's hard for me to say how sweet (etc) they are naturally. I can, however, recommend this recipe. Now we just need to find a use for the leftovers...
Posted by Ben at 5:51 pm 2 comments: Links to this post

We had Catherine Hakim give a talk at our department seminar (C2G2) last week, based on her controversial book Honey Money. I haven't, to be honest, read the book itself, so wasn't sure what to expect. The idea that attractive people benefit from their attractiveness in all sorts of ways sounds like a typical case of much academic research being done to prove the bleeding obvious, but I think Hakim does raise important issues.

Attractive people, she said, are likely to earn 10-20% more and also to win around 15% more votes in elections. (Other studies have also suggested that Beauty Pays.) On almost any account of justice, this seems like an injustice - and one that hasn't gone unnoticed, particularly by the 'ugly'.

It's interesting to see that BBC coverage of this book raises the issue of attractiveness in elections (although suggesting that the effect is only 2%).
Posted by Ben at 5:26 pm 1 comment: Links to this post