Lightning doesn't strike twice... or does it?

An unusual story from Massachusetts, where Raymond Roberts didn't simply win the lottery once, but rather bought SIX winning tickets. The odds of winning are apparently 1 in 1.8 million. I guess that, if you buy six tickets with the same numbers, then the odds of winning six times aren't actually any higher. An interesting case for probability exercises too.

Publication: How mandatory can we make vaccination? (Public Health Ethics)

Another paper has just been published. This makes two papers published in one month, after this previously announced one, although this newer one is only online so far. I'm not sure when it will be in print. It looks like the journal haven't actually published their November 2022 issue yet, so I suppose it's possible that it will get an official print date of this year - though probably more likely next year.

"The novel coronavirus (SARS-CoV-2) pandemic has refocused attention on the issue of mandatory vaccination. Some have suggested that vaccines ought to be mandatory, while others propose more moderate alternatives, such as incentives. This piece surveys a range of possible interventions, ranging from mandates through to education. All may have their place, depending on circumstances. However, it is worth clarifying the options available to policymakers, since there is sometimes confusion over whether a particular policy constitutes a mandate or not. Further, I illustrate a different kind of alternative to mandatory vaccination. Rather than seeking less coercive alternatives to a mandate, we might instead employ an alternative mandate, which requires people to do something less than get vaccinated. For instance, we might merely require people to attend an appointment at a vaccine clinic. Whether this mandatory attendance policy is justified will depend on specific circumstances, but it represents another way to promote vaccination, without mandating it. In some cases, this may represent an appropriate balance between promoting public health goals and respecting individual liberty."

And, as usual, a word cloud illustrating the content: 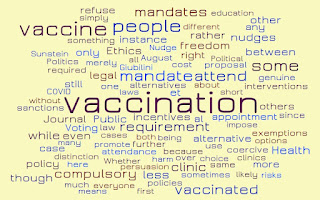 (I believe this was made by FreeWordCloudGenerator.)

Publication: Why Strike Ballots are Undemocratic (The Political Quarterly)

My latest paper has just been published, with open access, in The Political Quarterly. It's about strike ballots, so rather topical at the moment.

"Since 2016, new legislation governing strike ballots has made it more difficult for trade unions to achieve a mandate for industrial action. Such a mandate now requires that a majority of members vote in the ballot. This article argues that these balloting processes are undemocratic. The turnout requirement means that a mandate for industrial action does not simply depend on its level of popular support amongst union members. This has surprising consequences. Sometimes opponents of action would be better advised to abstain, rather than to vote against it. Thus, it is not always clear how they should vote. Whatever they do, their actions may be counterproductive. Further, even when they do know how best to promote their desired outcome, there may be a conflict between voting strategically and clearly expressing their true preferences. Consequently, there is no guarantee that the outcome of the ballot accurately reflects what people really want."

And here's a word cloud (produced by this handy site): 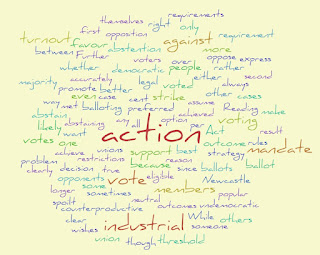 If you want to know a bit more, without reading the full paper, then it's based on issues that I blogged about earlier in the year, so that post is a kind of summary or preview of the paper.

Yesterday, Liz Truss was officially declared the new Conservative leader and, in consequence, Prime Minister. I don't have much comment to pass on this, yet at least, but I noticed an interesting bit in her victory speech, here, where she focuses on freedom.

Since freedom is the main theme of our 1st year political theory module, I might even use a snippet of this in lectures - though ideally I'd want a shorter edit of the speech.

Should under-18s get to pick the Prime Minister?

One subject that I'll be covering in my Democratic Theory module in the coming semester is the voting age. There's been a long-running debate over votes at 16 and some political theorists have gone even further, suggesting that the voting age should be lowered to 12, to 6, or even abolished altogether. Of course, there are others who think that it should stay where it is, or perhaps even be raised higher.

In this context, I was quite interested to learn that children as young as 15 can vote in the current Conservative Party leadership contest. There's no need to be eligible to vote in general elections in order to participate. (Similarly, one need not be a British citizen either.)

The BBC article, linked to above (first one in the previous paragraph), includes interviews with several young Conservative Party members, most of whom seem to oppose a general lowering of the voting age. One is reported as saying that the fate of the country should not be in the hands of those who don't pay taxes, have mortgages, or support families. However, this ignores at least two things.

First, lowering the voting age to 16 wouldn't put the fate of the country in the hands of 16- and 17-year-olds, since they would still only be a small portion of the electorate. Those over 18 would continue to have a major say. Indeed, the electorate is currently dominated by the relatively elderly (because there are a lot of them and because they are more likely to vote).

Second, many over-18s don't do these things either. If one were to apply this principle consistently, then it would seem that these groups also ought to be excluded. I take it that this would be obviously undemocratic. Perhaps, then, the exclusion of 16-year-olds is also undemocratic.

The 1st year politics module that I regularly teach is about political ideas. I have, in the past, received feedback from students saying that they don't think it's really political. This comment isn't usually developed sufficiently for me to be clear what exactly is meant by this or what might make it seem more political to them. Nonetheless, I have responded by making politics one of the ideas covered. Determining what is and is not political presupposes having some idea of what politics is, which means doing some political theory.

There's an interesting piece in today's Guardian, however, about the decline of ideas in politics. 'Big ideas' from the likes of J. M. Keynes, Milton Friedman, or F. A. Hayek were partly responsible for significant changes in society. Yet, the author claims, today's politicians seem to lack any similar ideas. Perhaps this goes some way to explaining why my current students don't always recognise the relevance of ideas to politics.

In any case, the author goes on to suggest that this lack of ideas is partly responsible for the rise of identity politics as an alternative, before ending with the snappy remark that "politics without ideas is possible, but not necessarily desirable". Maybe I'll have students discuss this remark, to see what they make of it.

Should we tolerate Big Bang denial?

Catriona McKinnon has a couple of interesting papers on free speech and denial of the Holocaust and climate change. In both cases, the essence of the argument is that denialists are not really historians or scientists, even if they claim to be. (This is not simply saying that they are bad historians or scientists, but rather that they are not even doing proper history or science.) Therefore, there is no need to include their views in academic conferences, journals, etc.

I just came across a possibly parallel case, concerning apparent 'censorship' of papers questioning the Big Bang on arXiv. I say 'possibly' because I simply don't know enough about this case to judge. There's no obviously non-scientific reason, that I'm aware of, for anyone to deny the Big Bang.

I wonder whether this is a case where these papers ought to be allowed - even if they are mistaken (i.e. bad science) - or whether they ought to be excluded on the grounds that they are not really scientific (as, McKinnon argues, climate change denial ought to be).

Ben
I blog about whatever interests me, which includes - inter alia - politics, philosophy, my own professional life, football, music, and wargaming. Mostly I think I am talking to myself, but anyone interested in any of the content is welcome to join the conversation.